Therefore from the 15TH , not a day later,  The Peakies recommenced the good fight of taking live music to the masses, kicking off at what has become a regular slot at the very fine establishment of the Somerset Arms in Semington, which is not in Somerset.

Quite literally blew off the cobwebs from the gear and gave it a go, based on the wobbly foundation of a random rehearsal a few weeks ago.

Social bubbles floated around, appropriate distancing maintained at all times and hands washed between every slice of rock n roll.

It wasn’t the most razor sharp of performances and it wont be the new normal, but a fine workout for all concerned. We did draft in our bass player stunt double Lisa in case Si had forgotten how to play the big cello, but after a pre-gig pep talk from Lisa he was able to deliver the goods. We are forever in her debt. 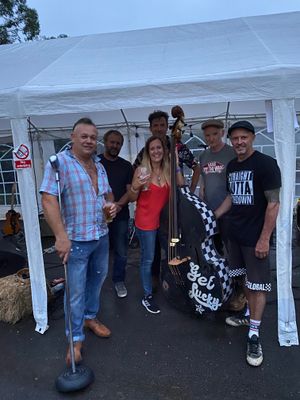